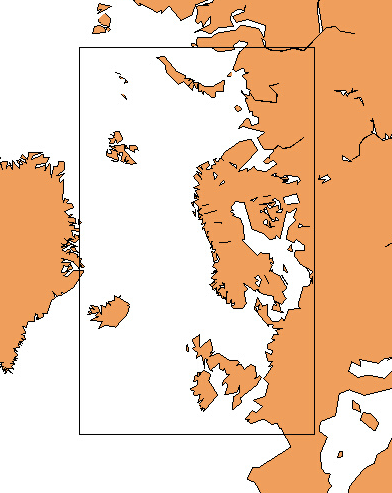 The figure above shows the domain for oceanforecast available at api.met.no.

The wave forecast system at MET Norway uses the spectral model WAM. This model describes the evolution in time and space of wind-generated surface gravity waves. Such waves have periods from one second to five minutes. The significant wave height can vary from less than a meter to approximately 22 meters, depending on the wind conditions. The model describes the propagation of waves generated remotely, called “swell”, as well as waves that are closely related to the local winds, called “wind-sea”. The wave field on the ocean surface is a combination of swell and wind-sea.

The regional wave model (WAM4) that covers the Norwegian Sea, the North Sea and the Barents Sea, has a 4 km resolution and it is forced by winds from MEPS with 2.5 km resolution, together with winds from ECMWF, and with ice concentrations from OSISAF satellite observation. Its boundaries come from the ECMWF. WAM4 forecasts are updated 4 times pr day.

The pan-Arctic wave forecast model (WAM3) has 3 km resolution and is forced with winds delivered by ECMWF and with sea ice and surface currents (that do not contain tides) from MET Norway’s TOPAZ system. The winds from ECMWF come with a horizontal resolution of approximately 10 km (0.1 x 0.1 degrees) while the ocean currents and sea ice fields come at a resolution of 12.5 km. The boundaries of the pan-Arctic wave model come from ECMWF. WAM3 is used for forecasting from 66 to 240 hours and is updated once pr day.

Historical ocean forecasts are available for download from our thredds server.

The variable names are based on the international CF Standard Name vocabulary, which is mandatory for all governmental scientific institutions under the EU INSPIRE directive.